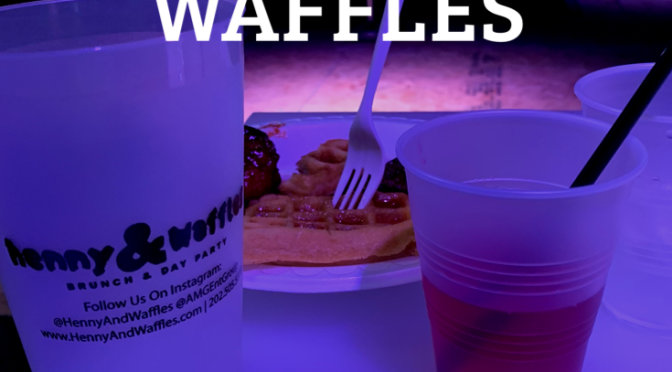 As you all know I love brunch and everything that comes with it but this twist is one of a kind! Henny & Waffles is the official East Coast brunch and turn up! Based out of Washington DC, the name certainly speaks for itself.

Henny & Waffles is a lavish, all you can eat buffet that turns into a day party, frequenting various locations. With specialized drink and food menus, the brunch buffet is from 1PM-4PM, rolling straight into the day party. This particular weekend that I attended happened to be Norfolk State’s Homecoming #NYTHC and the vibe was everything I expected it to be.

Held at Broadway nightclub in Norfolk, VA, I admit this was my first time here. I’m not too big on the club life, with the exception of birthday parties or other sporadic events that may pop up. Henny & Waffles was that sporadic event for me and Broadway. We arrived around 1:30 as several others were also pulling up. There weren’t that many people inside, so it was odd for there to be a line to get inside. Nevertheless, we made it inside about 10 minutes later and scanned our tickets to receive our wrist bands and our Henny & Waffles cups. With tickets priced at $50 a piece, (drinks sold separately) I was curious as to what this brunch entailed.

The lavish brunch menu posted on the henny & waffles website included henny whole wings, crab balls, fried fish, waffle station, omelet station, mac & cheese, turkey sausage, home fries, bacon, garden salad, desert, fruit and more. I am a foodie at heart, so its above me to take a glance at the menu prior to trying new things so I already have an idea of what to expect. The set up inside was a bit confusing when it came to the brunch bar. People kind of formed their own line with no direction from staff. The breakfast bar was not as big as I anticipated. The kitchen was continuously bringing out food, so not everything was available at the same time. They served fruit (grapes, pineapples and cantaloupe with powered sugar), two kinds of bacon, sausage, fried fish, mac & cheese, shrimp & grits, greens, regular and henny wings, eggs, and regular and red velvet pancakes.

I thought the food for the most part was pretty good, with the shrimp and grits being my personal favorite of the day. Some of the drink specials included unlimited mimosas and henny lemonade, which was priced at $15 and $10 respectively. The unlimited mimosas were served in the teeniest of cups, which meant several trips to the bar and was quite an inconvenience. The henny lemonade was good and strong and came in a bigger cup than the mimosas.

The vibe of the day party was pretty chill and you could tell everyone was out to just have a good time. My type of crowd lol, I was a little happy inside to see that it was just the perfect amount of people, definitely not empty, but not too many either. The club also offered hookah at a ridiculously overpriced rate, but I guess it comes with the territory.

Overall the event was a bit pricey but it was good way to end the weekend, have a few drinks and enjoy the vibe. They travel to different cities, so check to see if they’ll be headed your way! 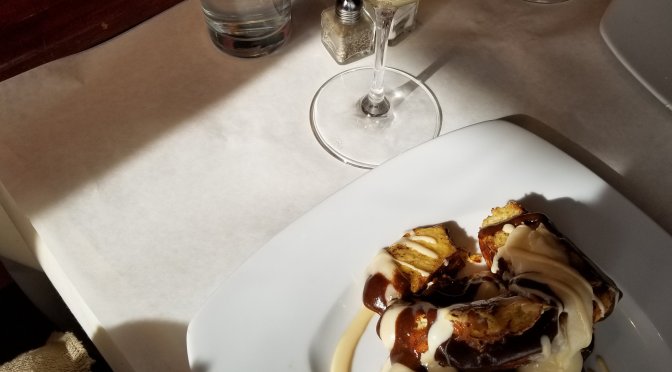 As you all know, brunch chronicles are a favorite of mine and this feature was no different. I’ve never been here before but was excited to try it out. Located in a strip mall with plenty of parking, it was easy to get to. The brunch hours here were listed from 10:00 am – 2:00 pm. We arrived right before 1:00 and there wasn’t much of a crowd but I certainly complaining. Our server was friendly, prompt and attentive.

The brunch drink menu wasn’t that extensive, but they did offer a few mimosa and bloody Mary options, with a full bar in case you need something on the rocks. I opted for the pineapple mimosa and water of course! It was just enough juice to taste but left the champagne taste to savor.

The brunch menu options were plentiful! I was torn between the shrimp and grits, the lump crab or the classic omelet and the Pan Purdue (French toast, bacon and hashers). I inquired about the cinnamon roll French toast option and our waitress explained that it was actual cinnamon rolls friend the same way as French toast and served with buttercream and caramel icing. I was sold!

The French toast was heaven and very filling! I even had enough to bring home despite arriving with my stomach on E. I always try to portion control my meals to still eat what I want but not fall too far off track. Balance lol. Overall Passion the Restaurant was a great experience and I plan to come back! 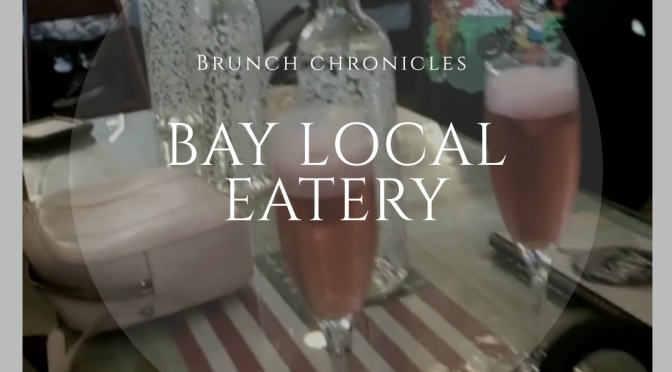 Good morning and Happy Sunday! Authentically_mi the blog has been up for a month and a half and it been great so far. This post is going to be a bit different from my content so far. I wanted to branch more into what else the Authentically_mi brand has to offer. Eat Read Sip is a book club and review platform that includes the self title online/local club, book reviews, and Authentic Eats. Brunch Chronicles is a series of Authentic Eats featuring various brunch reviews, local and afar. Check out that section for more details! I decided to start this series off with a fairly recent visit to Bay Local Eatery, a gem located in Virginia Beach, VA.

My first impression was how busy this place was and the fact that parking was hard to find. They have a huge parking lot across the street, but towing is enforced for the restaurant over there so I highly advise to try and find street parking. Nothing is worse than thinking you’ll get away with it and coming out to no vehicle in sight and a hefty fine to get your car back. After a 15 minute roundabout, I was lucky to see someone pulling out.

Once inside, the waitress told us there was a 45 minute wait, which was long but we decided to stick it out. Luckily for us they had seating right by the door along with a few drink menus. We were able to go up to the bar and grab a drink prior to our table being ready so the time flew by. I was surprised to see that their brunch menu is served all day instead of the usual 10 am to 2 pm.

My friend and I both got the regular pomegranate sorbet mimosas and they were delicious!  The sorbet covered in champagne was a great combination. The drink became sweeter the longer it sat, plus it remained cold. Once we were finally seated, I decided to try the mango sorbet mimosa and the flavor was ok but taste wasn’t as noticeable and sweet like the pomegranate. Between the two I definitely prefer the first one!  I glanced over the menu and the food options were plentiful!

Part of me wanted the jamaican dark rum french toast, the light tower omelet, Da club sandwich and the hangover just to get the beer in the bag lol. I had every intention on getting the omelet but at the last minute I switched to Da club this time with a jumbo pomegranate raspberry mimosa (this mix is really good 😋). They allow you to mix flavors for an additional dollar, but you have to get the jumbo size.

This sandwich was massive 😳. I had to bite at the corners to avoid looking too greedy lol. It was much bigger than I was expecting but it was very tasty and filling! They did not skimp on the meat, which is covered by this huge slice of cheese. I wish I had taken a better picture of the inside. The fries were well seasoned and crispy but too not hard. I always try to portion control my meals so that I can still enjoy the foods I want but in moderation. The weekend are my cheat days so I try to make them worth it. This brunch more than doubled as lunch the next day….. I wish the drinks were to go too lol.

All in all this was a great brunch experience with good food, awesome drinks and a nice, relaxing atmosphere. What are some of your favorite brunch spots? Make sure to check them out if you are in the area and subscribe to stay with to date with my latest brunch chronicles adventure!

There was an error retrieving images from Instagram. An attempt will be remade in a few minutes.

A brand dedicated to authenticity, self love, self discovery, healing, empowerment and travel

A new read for the month of July! . . . . . #hiphop #blackhiphop #culture #fortheculture #culturalcontrast #blackamerican #newbook #currentreads #ados #changingthenarrative #newage #blackamericanculture #killthestereotype #hiphopculture #hiphopcommunity #thechasm #defineddefinition #ilovetoread #booklover #knowledgeseeker #jewelsofknowledge #instaread #knowledgeispower #blackauthors #shereads #readingislit #blackwomenwhoread #enlightenment #mindbodysoul #wisdom
My @amazonkindle is home to many of my new books. While I love physical books, my collection has gotten quite large so this transition was more than necessary! . . I'm nearing the end of Sacred Woman by Queen Afua and I definitely enjoyed the perspective and jewels dropped in this book. What are your thoughts on this book if you've read it? What are you currently reading? I love adding new books to my arsenal so let me know down below! . . . . . . #sacredwoman #bookworm #ilovetoread #queenafua #springreading #mindbodysoul #enlightenment #wisdom #jewelsofknowledge #knowledgeofself #knowthyself #bookclub #spiritualpower #spiritualknowledge #knowledgeispower #igbooks #fortheloveofbooks #instaread #readblackwomen #readingislit #lovetoread #bookporn #bookhoarder #bookrecommendation #readingisfundamental #bookcommunity #readersofinstagram #shereads #authenticallyme #authenticallymi
Good afternoon ERS family and welcome to April! This year is already flying by! . . We are trying to revamp this book club this Spring! What better time than now to find a new book, meet new people and have a different kind of hobby to participate in! . . Looking for like minded individuals who are active participants who love to eat, read and sip with a lil bit of socializing 🥂 . . What are some books you want to read? Let me know your opinions 📖 . . . . . . . . . #bookclub #ilovetoread #read #enrichthemind #reads #goodreads #eatreadsip #localbookclub #757bookclub
Finally got my copy! Can't wait to get started 🍷. The 15th is on Tuesday, I hope you all have yours too!! . . . . . . #bookaddicts #booklover #becoming #eatreadsip #onlinebookclub #localbookclub #michelleobama #wineandread #bookclubofinstagram #757bookclub #booksandcoffee #kindle #kindlereads #goodbooks
Happy Friday! . . . . . . . . . . #mood #rainydays #bookadict #bookworm #booksandcoffee #wineandreading #wineandread #allreadersunite #757bookclub #bookclub #socialize #womenwhoread #readingislife
I think this is a good first book to begin our new book club and kick off this new year! Have any of you read it yet? What are your thoughts? . . . . . . . . . . . . . . #bookaddict #michelleobama #becoming #thoughts #discussion #bookclub #757bookclub #757readers #757moms #757 #757ladiesnight #757ladiesnightin #happyhour #ilovereading #ilovetoread #booksareus #knowledge #growth #empowerment #eat #read #sip #eatreadsip